Q. How does one tell real silver (sterling) from silver plate?

A. It is not as easy as one would think, due to some makers and retailers trying to mislead one into thinking silver plate is real silver. Also, the absence of marks on silver plate adds to the confusion.

Let's deal with American silver only, as this encompasses most of what we see in this country.

(For the record, every country possesses different marks, quality of silver, regulations and so on. Canadian and Mexican marks are quite similar to American ones, while the United Kingdom, Scandinavia, Germany, the Netherlands, France, Russia and etc., are quite different).

The most common misconception I encounter is "It must be real silver because it tarnishes." Often I hear the exact reverse of this.

Not true. Both sterling and silver plate tarnish.

On occasion, makers may use 95.0% silver when they are doing hand engraving on fine pieces of holloware and would rather give away some silver to reduce the amount of time needed to do the hand engraving.


Pieces marked as the following are not real silver and usually contain no silver:

Silly as it seems, if it says “silver” and not “sterling silver,” it means it’s not actually silver!

Silver plating was first invented in 1841 by Elkington Co. in England. In America, The Roger Brothers started producing large quantities of silver plate in 1847.

There are around 1,200 American silver plate patterns, of which about 165 are popular and considered collectible. Two of these – "Holly" and "Moselle" – tend to be more expensive than almost any sterling patterns. The elaborate die-work that went into creating the patterns, the exquisite details and beauty and rarity make them very desirable and collectible.

One maker's name in particular might confuse the public: Sterling Silver Mfg. Co. produced flatware back-stamped with their name and – in most cases – the pieces are not sterling but silver plate.

Silver plate is a base metal, usually copper, that is electroplated with pure .999 silver. On occasion I have seen it plated with .925 sterling silver.

Sometimes a piece says "silver plate" but more often it does not. It is more the absence of real silver designations that indicate silver plate.

Some coin pieces are marked "coin" but most are not. Quite often it is only back stamped with the name of the maker.

It would be best to read about "coin" or attend antique shows and have a knowledgeable dealer show you examples of coin silver pieces and point out the various marks.

Here are some examples of sterling patterns that are extremely popular today (Below, left to right. Click each picture to enlarge): 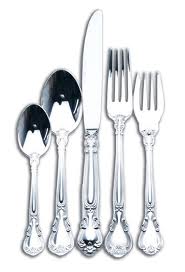 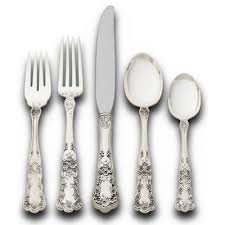 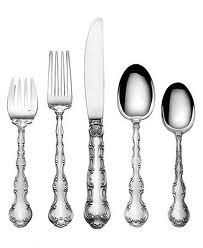 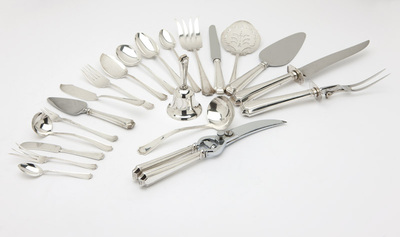 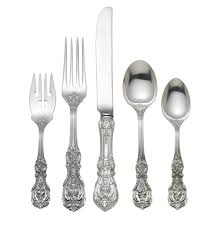 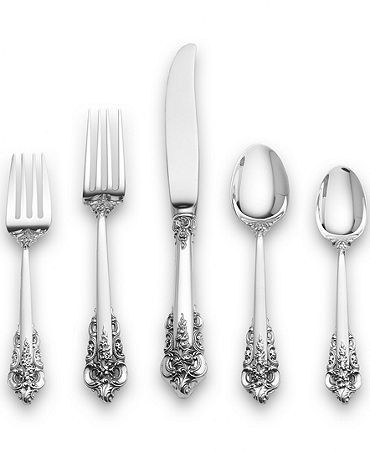 The list could go on for pages but you get the idea; what was popular years ago is primarily what is still popular now with collectors and users of silver. The same is true of silver plate.

Always collect what you like, but best practice is collecting numerous pieces and patterns, and not only one pattern.

Q. Do you have a favorite pattern regarding Sterling Silver? If so, what?

At antique shows I am frequently asked this question, especially by people looking to start a pattern or add other patterns to their collecting.

“Waltz of Spring” (Sterling) introduced by Wallace in 1952 and designed by William S. Warren, one of my favorite designers.

Warren described the pattern as his interpretation of a dancer spinning around. I love the clean design and the curvatures on all pieces fit your hands. It is the most practical and comfortable pattern I have ever used; it is not too fancy and it is not too plain.

My favorite piece of Rose Point hollowware is the mayo bowl with attached under tray. The pierced pattern reflects from the round base onto the totally plain bowl. Stunning! It is well designed and thought out. His hollowware in "Grande Baroque" and "Rose Point" commands high prices because of the beauty, function and design.

Many of the Gorham patterns from about 1894 to 1914 designed by William Christmas Codman are superb. Examples are "Chantilly," "Buttercup," "Lancaster," "Strasbourg," "Cambridge" and dozens more. Good designers could create superb fancy AND simple patters as well as middle of the road ones. They created large numbers of excellent patterns.

Most of the dozens of today's very popular patterns were designed by just a handful of men. Yes, there were women designers also. Mary Parker Fleming teamed with Grosvenor N. Allen to create Oneida's most popular sterling pattern "Damask Rose" which was first introduced in 1946.

One interesting thing I have noticed over the years is that almost without exception, if one likes “Waltz of Spring” they often also like Wallace's “Romance of the Sea,” (Sterling) introduced in 1950. William S. Warren created dozens of spectacular patterns from the early 1930's until the 1960's. Some of his well-known and popular sterling patterns are "Grande Baroque," "Rose Point," "Stradivari," "Grand Colonial," "Romance of the Sea," "Waltz of Spring," "Sir Christopher" and on and on. They are well designed front, back and side and well balanced. They feel heavy in the hand, and the way the light hits the ridge on the handle of "Grand Colonial" flatware is striking.

“Pansy” (Sterling) was introduced in 1909 by International Silver Co. It was designed by Samuel Stohr who also created the fabulous silver plate pattern, Vintage, in 1904.

I like almost all of Stohr's designs. The pansies are stunning and are especially beautiful on the salad forks towards the times and the bowls and ends of berry spoons, cold meat forks, gravy ladles and so on. The pattern reminds one of Gorham's “Buttercup” but, in my opinion, “Pansy” is much more beautiful.

Q. Do you have a favorite silver plate pattern? If so, what?
I like the faceting towards the tines of the salad forks, as well as inside the bowls of the sugar spoon, gravy ladle, and large berry spoon. The pierced dessert server, pierced tomato server, and pierced bon bon/nut spoon are gorgeous.

It was so popular that a large assortment of holloware pieces was made. Some of my favorites are the water pitcher and the demitasse set consisting of creamer and sugar. The demi pieces are fluted or sectioned.

Q. So, who’s the best maker of silver and why is one maker worth more than another? What makes a “good” piece of silver?

One bought individual pieces called "dozens" by weight in the late 1800's until about 1918. Gorham offered five weights. From lightest to heaviest they are Trade, Extra, Regular, Heavy and Massive. One paid according to the weight. A dozen teaspoons in Chantilly weighed 12 ounces troy in Regular weight.

(I often have requests from people who want the “good, old, heavy silver.” In reality, good old “Trade” and “Extra” weights are lighter than current production, and regular weight is about the same as current production. “Massive” is extremely rare as people did not feel the extra money for a little more weight than “Heavy” was worth it.)

Wallace, Reed & Barton, and others worked primarily in Regular and Heavy weights and one paid accordingly.

The weight of a pattern is primarily a function of what it takes in thickness of silver to create the desired design. For example, the "Love Disarmed" pattern by Reed & Barton with a maiden in a filmy, flowing gown clutching a cherub is astounding for its beauty and weight. The reverse of the handle is beautiful with three dimensional floral design. To achieve the pattern Reed & Barton made "Love Disarmed" twice as heavy as Francis I, and it is much heavier than Wallace's "Grande Baroque."

On a more personal note, I feel that -- to a large extent -- the more things change the more they stay the same. This is certainly true of sterling and silver plate patterns. Beauty seems timeless, and the spiritual appeal of a gorgeous pattern does not know time limits. Artistry in silver that is stunning in 1890 remains so in 2014. It is a certain something that seems to appeal to the soul. We like things that flow (art nouveau) and things that are linear and broken and streamlined (art deco). 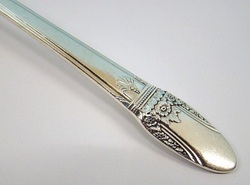 Why does "First Love by Intl. 1847 Rogers Brothers in silver plate appeal to generation after generation?

It is hard to put your finger on it but it appeals to our spiritual side of beauty and it is just the right blend of floral, art deco and perhaps art nouveau. Bottom line is millions of us love it because it is what it is. We cannot define it, yet we simply know it. Gorham's sterling pattern "Chantilly (1895) is the most popular pattern ever created in silver.

Why? I feel it is because in our deepest interiors we feel the beauty. No one has to tell us. We know it. It flows, it is simple yet it is complex. It is the perfect blend that matches what the human soul perceives itself to be, and thus, we love it because it is us.